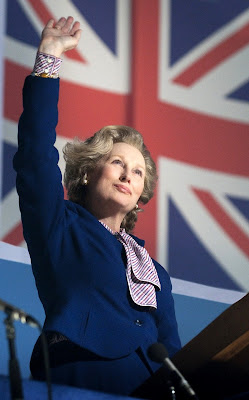 Biopics are rarely the best way of getting a handle on the social or political world. They are too focused on the career or character of their central figure. Everything else, including other people, is only superficially sketched, subsumed by the actions, thoughts, and feelings of the film’s protagonist. Phyllida Lloyd’s The Iron Lady, one of the better recent works in the genre, is a perfect example of the biopic’s limits and strengths.

It opens with a frail old woman on the cusp of dementia, Baroness Margaret Thatcher (Meryl Streep), tottering around her monochromatic and shadowy but comfortable apartment, living with fractured memories of her triumphant past. She is sustained by these memories, including the ghost of her gin-drinking, golf-playing husband, Dennis (Jim Broadbent), who offers her reminiscences of good times and total devotion. When her concerned daughter Carol (Olivia Colman) visits, Thatcher responds without much affection or respect—as if Carol is merely a professional caregiver. Her feeling of rejection in these scenes is subtly projected, without a false note.

The scenes of an aged Thatcher are deeply affecting, but there is a bit too much of her relationship with Dennis, which though somewhat humorous feels sentimentalized. His ghost seems to have been inserted to soften her characteristic harshness, to grant her more humanity. But watching Streep’s elderly Thatcher—a shell of her formerly commanding and abrasive self—reminded me of Shelley’s Ozymandias:

My name is Ozymandias, King of Kings;
Look on my Works, ye Mighty, and despair!
Nothing beside remains. Round the decay
Of that colossal Wreck, boundless and bare
The lone and level sands stretch far away.

Despite Thatcher’s callous economic and social policies and overbearing personality, one can’t help but feel compassion for a woman facing the decay of her mind and body. It’s something that ultimately confronts us all, both the rulers and the ruled—the inescapable tragedy of the life cycle. The film poignantly captures it.

Streep, embodying both the senile and the formidable Thatcher, is the film’s greatest asset. She encapsulates Thatcher’s distinctive voice, intonation, posture, and motions (and her matronly hairstyle is done with utter precision), but she goes beyond that, to Thatcher’s essence. That’s no small feat: it’s hard to capture the soul of a woman so severe and strident that she could declare, “Feelings do not interest me, thoughts and ideas are what matter the most. What we think is what we become.” Thatcher acted out of a sense of moral rectitude, without doubt, self-awareness, or a capacity for self-criticism.

Alexandra Roach plays the young Thatcher, who is a touch more vulnerable but no less ambitious than Streep’s character. She adores her father, a small-town, conservative grocer. Thatcher is spurred on by his words, “Never go with the crowd.” After attending Oxford, she wins a seat in parliament in 1959 at the age of thirty-three. By then she had already taken measure of the condescending upper class “old boys’” milieu that dominated the Conservative Party, preparing her leadership takeover in 1975 and eventual three terms as prime minister, from 1979 to 1990.

When the young Thatcher meets Dennis, she informs him that she will not be the traditional domestic wife but plans to leave a mark on the world. He responds that he loves her, because she isn’t going to be that woman—making the seemingly conventional Dennis an unusual man for that era. Indeed, Thatcher aggressively asserts her independence as a woman and has the capacity to dominate the men in her cabinet. But she has no link to other political women or any interest in feminism. The film gives no sign of female confidantes or of a strong connection to her mother; Thatcher goes as far as to say that she prefers the company of men to women.

But from the evidence of the film, Thatcher was emotionally insulated and really didn’t need many other people at all. Besides her husband and father, only Airey Neave (Nicholas Farrell) plays a role in her private life. Neave was Thatcher’s campaign manager when she was elected Conservative Party leader, and was appointed Shadow Secretary of State for Northern Ireland. But an Irish terrorist group assassinated him before he could take office in 1979, moving Thatcher to genuinely grieve over his death.

Thatcher changed the nature of the Conservative Party by undermining its paternalistic and totally male elite, an upper-class aristocracy committed to preserving the welfare state and a consensual politics dedicated to the idea of “one nation.” Thatcher rejected compromise and began to dismantle the welfare state. Her politics appealed to a rising lower-middle class and the skilled working class. She promoted an entrepreneurial culture where the acquisition of wealth and the consumption of goods became the prime goals. She believed social good came not from unity but from conflict between interest groups, was utterly unconcerned with what happened to the poor, and treated the unions as her prime enemy.

But watching the film, one would never know that though she professed commitment to a meritocracy where class status would never be an obstacle, she opposed all redistributive programs. That she made Britain less equal by easing the capital gains tax and reducing the top rate. The Iron Lady offers nothing more than the most superficial exploration of Thatcher’s politics. We get Thatcher, but not much Thatcherism.

Massive chunks of her career in office are awkwardly evoked and compressed through a montage of high points (or low points, depending on one’s perspective). We see her taking an uncompromising and jingoistic stand on the Falklands War, a victorious military campaign that helped her win the 1983 election in a landslide. We also get a look at the miners’ strike of 1983 and, in grainy archival footage, the mid-1980s financial sector boom and the poll tax riots of 1990. Only one scene, where angry protesters slap on the window of Thatcher’s limo to tell her she’s “a monster,” gives us a sense how hated she was by a portion of the population. And the only moment of parliamentary opposition comes in a glimpse of a tirade by Labour leader Michael Foot in the House of Commons. (Of the effects of Thatcherism on the Labour Party, there’s not even a glimpse.) The Iron Lady may convey a clear sense of Thatcher’s character flaws, but it mostly passes over how divisive a politician she was.

Political films like Ken Loach’s 1995 Spanish Civil War drama Land and Freedom feature scenes of intellectually exhilarating ideological debate, but The Iron Lady desires a large audience and doesn’t pretend to be intellectually sophisticated. When we finally see a scene with Thatcher’s cabinet, close to the end of her time in office and as her popularity is waning, it exists only to show Thatcher cruelly dress down her ex-Chancellor of the Exchequer and ex-Foreign Secretary Geoffrey Howe (Anthony Head), as if he was a failing, slow-witted pupil. There’s also no mention of the intellectual force behind Thatcherism, the anti-Keynesian Keith Joseph, who famously declared, “We are over-governed, over-spent, over-taxed, over-borrowed, and over-manned.”

In The Iron Lady, political and social institutions can’t withstand Thatcher’s steely will. It’s a distortion of history, and leaves us wanting to know why her final term in office turned into a disaster—a fact that can’t merely be explained by her behavior toward fellow cabinet members. Contrary to this film, the personal is never the whole political story.

Still, if The Iron Lady fails to give us a critical handle on the policies of this political and public woman, it brings to life, through Streep’s brilliance, Margaret Thatcher the person. She was over-certain and insensitive but also talented and intelligent. She permanently changed the parameters of political debate in Britain, but she was also human, unable to resist our common mortal fate.

Leonard Quart is a contributing editor at Cineaste and the coauthor of American Film and Society Since 1945
Posted by Jenny at 02:09