Back to the Future? The Golem, Faust, The Seashell and the Clergyman 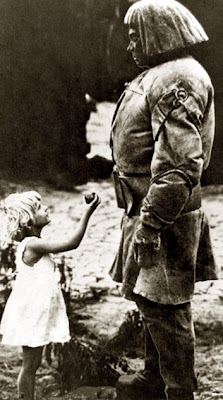 Recently, I have seen three truly great silent films in London: The Golem (1920) directed by Paul Wegener with Wegener himself playing the Golem screened as part of Jewish Book Week at King's Place and accompanied by a new musical score by Robin Harris who played the piano, with Laura Anstee on the cello. You can see a ten minute version here without the Harris score;
The Seashell and the Clergyman (1928) 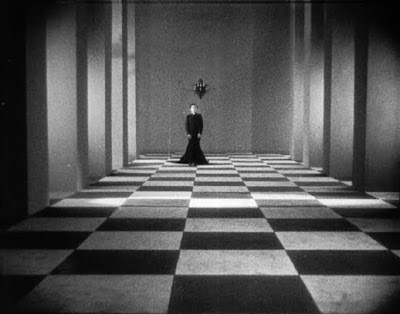 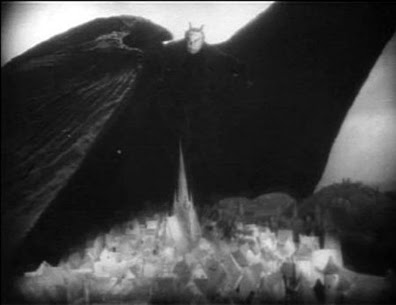 with Emil Jannings as Mephistopheles, a visual feast of innovation which I saw at The Royal Festival Hall with the Philharmonia Orchestra playing Aphrodite Raichopoulu's new score with improvisations by piano soloist Gabriela Montero. The visual and auditory surprises were myriad and the imaginative leaps made in these films and scores were far more astonishing than anything I've seen in recent cinema. Watch the trailer here.

I have also recently seen three contemporary films, all homages to the silent film era: Michel Hazanavicius’s The Artist, Martin Scorsese's Hugo, and Dan Pritzker's Louis. The first two films are by now renowned, the latter a weird pseudo-porn pastiche in which Louis Armstrong's New Orlean's childhood is reimagined via various early cinematic styles. The film was shown at the Barbican with a live score written by Wynton Marsalis. If it hadn't been for the score I would have walked out. (See Slant's review by Andrew Schenker here.)
The chasm of quality of experience between the first three films and these last three is wide and deep. Sadly, while the films made in the 1920s were all about innovation, playing and stretching the medium to see what it could do, taking film to the limits of its capabilities and peering beyond, the three films made today contented themselves with relying exclusively on nostalgia and the backward glance--and so were fundamentally boring. (Thank god for the dog in The Artist who drew inspiration, of course, from Asta of The Thin Man movies but transformed his character into an original.)

T.S. Eliot said something to the effect of "mediocre artists borrow, great artists steal," meaning that all artists rely on the past for their material, but only those who truly make what they have taken their own achieve something transcendent. There was a great deal of borrowing in The Artist, Hugo, and Louis, but little theft. It was as if all three filmmakers were terrified of looking into the future, even fleetingly, to see where cinema may be headed. At a time when cineplexes are chronically empty, audiences far more content to stay at home and watch youtube and play video games, is nostalgia (and 3-D) really all the cinema has to offer us? I have noticed that the post-Oscar ads for The Artist claim that "It's not just a film, it's an "Experience." Vertigo, Sunset Boulevard, any Rudolph Valentino film, Citizen Kane, Singin' In The Rain and all the films The Artist borrows from are "experiences." The Artist is mostly retro camp.

Perhaps the remarkable popularity of silent cinema accompanied by newly commissioned live scores (all I've attended have been sold-out performances) points to what is missing from today's movies: the communal experience, the spontaneity and excitement of participating in innovation, the thrill of catching a glimpse of the future while mining the past.

In this vein, Canadian filmmaker Guy Maddin at the Pompidou Centre in Paris has been making a film-a-day inspired by lost silent films in a series of "ciné-séances" called Spiritismes. The public is invited to witness the making of a new film inspired by a long-lost movie. Summoning spirits of lost cinema in theatrical “séances,” Maddin and his actors inhabit their ghostly scenarios. The project finishes on March 12. You can watch live streaming of the films being made on the Pompidou Centre website here.

For information about silent film screenings in London, go to the wonderful website Silent London

The organization Birds Eye View, dedicated to supporting women filmmakers, commissioned several new scores for silent films made by women, including Imogen Heap's score for The Clergyman and the Seashell.

A beautiful tribute to silent film is included in David Denby's gentle slam of The Artist in his New Yorker piece "The Artists."

For more on silent screenings across Britain see this Guardian post.

In June, Bologna's Cineteca Cinema Rediscovered festival will feature newly restored films by Lois Weber, who is described by Cineaste's editors as "a trail-blazing silent director known for her films exploring topics that reflected a prescient concern with the status of women in a male-dominated society." For more on Lois Weber, see The National Women's History Musuem's excellent on-line exhibit "Women in Early Film."

In October, the Pordenone Silent Film Festival will present "The Dickens Bicentenary," a series of silent films based on books by Charles Dickens.
Posted by Jenny at 04:25