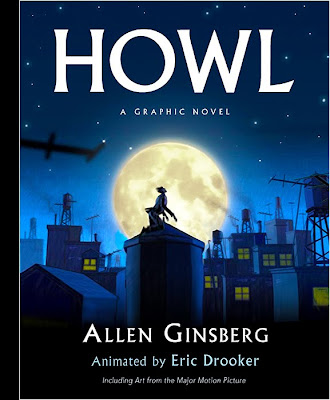 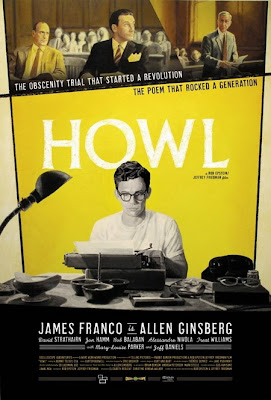 Howl is a howl, of laughter or pain take your pick. Poetry made accessible to the masses is a nice idea (for more and frankly more interesting see: www.motionpoems.com) but the literalization of Ginsberg's poetry through less-than-inspiring animation by Eric Drooker was just too much for me. The film is a primer on how to take a great work of literature and banalize it beyond recognition. James Franco's performance was exceptional and he'll probably win an Academy Award or something for it but to me it felt like a lot of strutting and fretting for his 90 minutes upon the stage, full of sound and fury but, contrary to Ginsberg's poem, trying to Signify Something. (In the new year I will go see Derek Jacoby play King Lear at the Donmar and with any luck--and so far all signs positive--his performance of "howl, howl, howl" will redeem all.) The obscenity trial was a pretty flat courtroom dramitization. And even though the cameos were fantastic--Mary Louise Parker and Alessandro Nivola in particular--they could do just so much. My present infatuation (I have a feeling I'm not alone), Jon Hamm, sadly couldn't muster any kind of enthusiasm for his role. I thought perhaps the casting was wrong and that Hamm should have played the prosecution lawyer (David Straithairn did the best he possibly could) instead of the defense lawyer but I doubt that would have helped. The film will undoubtedly increase sales of Ginsberg's "Howl" so I suppose, then, "Howl: The Film" won't have been a total loss.
Posted by Jenny at 05:06 No comments:

The Kids Are All Right 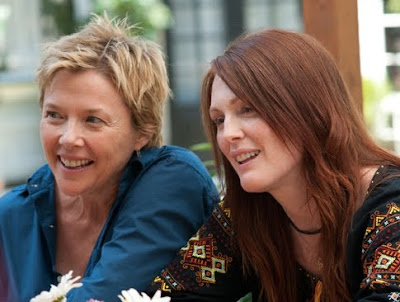 I laughed, I cried (not really), I was thoroughly entertained. This is a solid comedy and about lesbians no less! Wow, did I ever think I'd see the day when a film about lesbians would make it into the (albeit arthouse) mainstream? I am a fan of Lisa Cholodenko's other films High Art and Laurel Canyon. But whereas Cholodenko's other movies are interested in the relationship between the surface of things and the twilight zone below, this movie stays rigorously above the water line. Don't get me wrong, I like the film in a superior made-for-tv-movie kind of way but wish I had seen it on an airplane instead of at the London Film Festival. Whenever I bring my objections to the film up among friends and acquaintances (of the left-leaning kind, the right-leaning kind having not even consciously registered the existence of the movie), I am almost immediately asked if I have any gay friends. So let me just state once and for all Filmfatale's Gay Credentials: Some of my best friends are gay! So here is my greatest objection to the movie: THE SEX. Though there are many sex scenes, some rather hot, there is not one viable sex scene between the two lesbians. The couple--excellently played by straight women extraordinaires Annette Bening and Julianne Moore--like to launch their foreplay with gay male porn, a hilarious scene, full of oily male torsos, but then Annette and Julianne disappear under the blankets and that's it! Mark Ruffalo (also excellent, as are the kids) has great, steamy, and graphic sex with his hot African-American goddess of an employee and then with adorable-femme Julianne Moore fulfilling two standard white male fantasies. But what about the lesbian audiences or the straight women even??? We're probably 99% of the audience! But when did that ever matter. Once again our gaze is irrelevant, especially if the movie wants to make it into the big leagues. Aargh. Other objections: It's totally unrealistic that the family had no lesbian friends. They seem to live in complete isolation from the gay community, and so very fearful (though humorously so) that their son might be gay. The only friends we do see are a very heterosexual couple. Which brings me to my next niggle. Did Annette and Julianne's relationship have to be such a straightforward copy of the typical upper-middle-class heterosexual couple? Couldn't the writers/director have given us just a bit more complexity? Yes, of course, we all strive towards normalizing ourselves to middle class values, even lesbians, but it's never as easy or as plain as all that. Lisa Cholodenko's fine comedy opted for mainstreaming over plumbing the depths.
Posted by Jenny at 03:48 No comments: 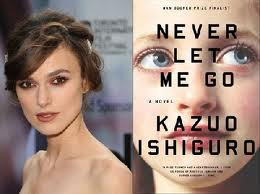 Kazuo Ishiguru is one of my favorite living authors but I will not here compare book to movie because, well, though it sits on my shelf I haven't read the book, but I also admire how Ishiguru himself said that once he signed over the film rights, as far as he was concerned whatever was created was something he could lay no claim to, he was simply eager to see what would happen.
The film describes a world, very near to our own (end-of-the-20th-century Britian), in which clones are created as living organ farms in order to increase the life-span of non-clones (presumably for those who can afford such a thing as there seem to be far fewer clones than non-clones and the clones are very well taken care of). The film had the potential to be great. The script was solid enough, though lacked a layer or two of finesse, the production gorgeous, if a little too gorgeous in that Merchant & Ivory way, which might have added something wonderfully creepy but the cinematography and production design seemed more intent on looking good than on providing contrast to the content. My biggest objection, however, was the casting. The three stars--Keira Knightly, Carey Mulligan, and Andrew Garfield--were excellent but the trio (and Keira Knightly most glaringly) had too much of the Movie Star aura about them to let this film deepen and mull as it needed to. Three unknown actors would have made a huge difference in allowing the material to truly disturb. Instead the audience is constantly distracted from the claustrophobic and horrific sadness of the story by the cult of the glam personality. (Same goes for Charlotte Rampling.) The result, I fear, is that most people will come away from this very prescient, not-so-science-fictional tale with the idea that it is a metaphor for and musing on our own mortality, when it could have been a very subtle and sophisticated damnation of our capitalist society and the rigid class system that prevails despite all attempts (albeit feeble) to do away with it under some guise of social justice. Of course, the film's greatest strength is also it's greatest flaw. It works hard to convey the idea that in this world cloning for organs seems so utterly reasonable that no one, neither the clones themselves nor the society at large, seriously objects to the practice. It's just accepted as another of life's necessary evils. We're all going to die some day anyway, the organ-donating clones just somewhat before their time and after two or three gruesome operations. This speaks to so much of what occurs every day in our here and now--organ farming actually does happen, but also horrific pracitices such as clitoridectomy or slavery or gross disparity of wealth, one country has an obesity problem while another starves. We all, more or less, accept these things, relying on the truism that this is just how it is, there's really not much we can do about it. It's a utilitarian world, after all. But the film never really leads us here. With all its high production qualities and fancy cast, implausibility reigns and the audience is sure cloning for organ farming could never, ever, happen, especially in England, or America, where there is a strong tradition of humanism and individualism and especially of fighting the enemy without (while entirely ignoring the enemy within). I was not unhappy I saw this film but it was most certainly was a missed opportunity.