Watching Nicole Kidman's Face in Before I Go To Sleep

This was an utterly ludicrous film--completely implausible, bad script, tired material. The gratuitous violence against women is just so cheap and easy and what the hell was the point of that shrink? "Countertransference doesn't happen so much anymore these days." Hilarious. Nevertheless, I was entertained by watching Nicole Kidman's face. Once upon a time, we watched actresses faces for range of expression, for the nuances in a glance or smile, the mystery in a furrowed brow or pursed lips. Instead, I spent the hour and a half analyzing and considering the effects of the botox, filler, and face lifts Kidman has subjected herself to in order to stay in the game. The film, if you filter out the sound and action and just stay focused on Kidman's face, is a piece of performance art for our times. You've got to hand it to her. She looks very weird, but she's very interesting to look at, and she does appear very young (the hands, alas, remain a giveaway.) It used to be that when an actress turned 30 she had to start playing grandmothers. Kidman in this film plays a woman 7 years younger than she actually is! Now that is a feat.
Posted by Jenny at 04:39 No comments:

Phantom of the Opera at Barts Pathology Museum 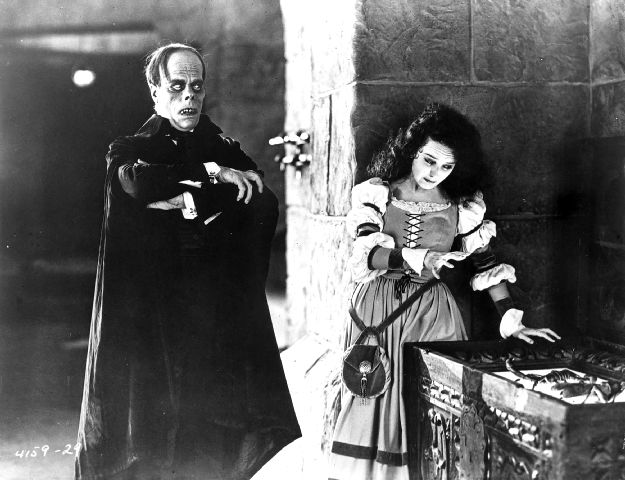 Last night, dark, rainy, and windy, I made my way to St Barts Hospital near Smithfield meat market. I entered into a maze of buildings, found the correct one, climbed three flights of stairs to Barts Pathology Museum, a vast two-storey room, its walls covered with shelves containing various shaped bottles displaying specimens of nature's most gruesome mistakes. I then got myself a gin and tonic and some popcorn and watched Lon Chaney in The Phantom of the Opera (1925). Despite the film's flaws (only Chaney had any acting talent, the story is a lesser Beauty and the Beast or Hunchback of Notre Dame with a little Svengali thown in), still it was a total experience, like being part of a piece of performance art. I highly recommend it. There are three more films to go: Silent Films at Barts Pathology Museum

In October, I took my two sons to the Royal Festival Hall to see Kubrick's 2001: A Space Odyssey with live accompaniment from the Philharmonia Orchestra. My boys will never be the same and they weren't even under any influence other than the movie, the music, and their mother.

I also saw an interesting take on the special relationship in A Yank at Oxford at the NFT in November with a sublime Vivien Leigh and an adorable Robert Taylor. I had just been reading about the heartthrob in Vicky Wilson's extraordinary new biography of Barbara Stannwyck. See my review here at Bookslut.
Posted by Jenny at 11:04 No comments:

American Hustle: Doesn't pass the Bechdel Test and is a bit of a snooze.

It's all hair and necklines. The script is all over the place, trying way too hard for little payoff. But the performances are generally very good, Christian Bale and Jeremy Renner in particular. Amy Adams and Jennifer Lawrence did the best they could with really very limited material. Their kiss pretty much sums up this movie: gratuitous. ***

Oops, on further reflection, technically it does pass the Bechdel Test because two of the female characters discuss nail polish for maybe sixty seconds while their husbands discuss business.
Posted by Jenny at 02:16 No comments: