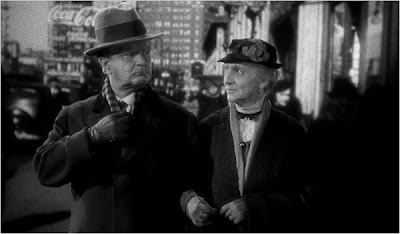 I'd never heard of Make Way For Tomorrow, but Leo McCarey had also directed one of my favorite films, The Awful Truth (made the same year, 1937), and I had been meaning to go for some time to one of The National Gallery's Saturday afternoon screenings of classic films. Their flyer billed Make Way For Tomorrow as "one of the great unsung Hollywood masterpieces, an enormously moving Depression-era depiction of the frustrations of family, ageing, and the generation gap." It sounded promising enough, though not a subject I would usually leap at. I had no idea what I was in for.

The story centers on an elderly couple who haven't planned for retirement. He is fired from his job and can't get another. The bank forecloses on the house and the couple finally tell their five adult children what has happened. There is no obvious solution as none of the children is particularly well off so the couple is split up, the mother going to live in New York City with a son, the father to a small country town where he sleeps on his daughter's sofa. The movie plays out the dreadful humiliation of what the aged must endure when entirely dependent on their children, and the heartlessness, frustration, pity, and guilt the children experience when faced with the "burden" of their parents. It is a shockingly real portrait of middle class family life across three generations and more than relevant to today's audiences. It is also an acute and beautiful portrait of a long term marriage.

With magnificent subtlety and artistry, this movie, perhaps more than any other I have ever seen, gets right at the awful truth of the human condition. It is certainly one the most honest and loving portrayals of basic human cruelty ever created. And some of the best acting--with Victor Moore and Beulah Bondi giving extraordinary performances as the old couple--ever captured on screen. The writing was pitch perfect, the screenplay by Viña Delmar, who also wrote the screenplay for The Awful Truth. (She was the author of a series of best-selling novels with titles such as Bad Girl, Kept Woman, and Loose Ladies about the real issues facing the modern woman.)

The film was, of course, a failure at the box office as the subject is simply not one most people want to face, myself included. But it is a subject that we actually do confront every hour of every day and the brutal truth of the film is our own: Ageing and death is the deepest, darkest of sins not only in our society at large but within our very families. Not only do we resent and despise those close to us for committing the sin of getting old, we know our turn is at hand and loathe ourselves for it. The last thing we are prepared to do for ourselves or for others in any meaningful way is to Make Way For Tomorrow. Though the very end of the film is relentlessly bleak, in the stunning denouement when the couple tour New York City during their last hours together before being split up again, this time surely permanently, McCarey gives us a deeply moving vision of old age in the fullness of its elegance and integrity.

Orson Welles said that the movie "would make a stone cry" but this film is not sentimental. Nor is it a cold-eyed view of man's inhumanity to man. Its devestating power to make us weep is found in how generous and understanding McCarey is to each of his characters, all of whom, even those most apparantly selfish, display the whole gamut of emotions from sheer loving kindness to begruding niceity, to petty meanness, to heartlessness, to sadistic pleasure. No one is innocent, and we're all guilty.

Make Way For Tomorrow was an inspiration for Ozu's Tokyo Story, a fact I find at once surprising and obvious. I always thought that slow, subtle, penetrating depth of vision into family dynamics so uniquely Ozu's, but McCarey's influence on Ozu is indeed perfect.

McCarey claimed Make Way For Tomorrow was the best film he ever made and in 1938 when he won the Oscar for The Awful Truth he held up the golden statue and told the audience, "This is for the other one." 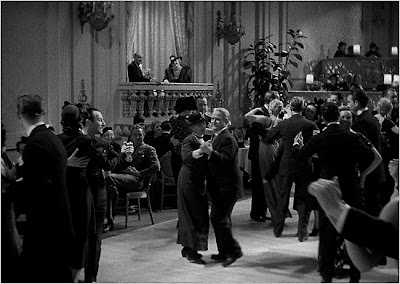 Silken Skin--directed by François Truffaut, his fourth film, made in 1964, this is a gorgeous movie about a married French intellectual's passionate love affair with a stewardess, exquisitely played by Françoise Dorléac, Catherine Deneuve's older sister who would die tragically in a car accident soon after the making of this film. Wonderfully detailed, delicate and engaging, that is right up until the last scene of the film which is just silly and reminds me of how hard finding the right ending can be.

The Hereafter--directed by Clint Eastwood, entertaining enough but mostly plodding and never soars, except in a very early scene in which Cécile De France is nearly killed by a tsunami. Very beautiful and very eery on many levels. Matt Damon was adequate but Bryce Dallas Howard's brief cameo stole whatever of the movie there was to steal.

Blue Valentine--another portrait of a marriage, though this one was so one-dimensional as to be confusing, causing this viewer to repeatedly wonder: am I missing something here? The script was flat and cliched but Michelle Williams outstanding performace saved the movie from being a complete waste of time. Ryan Gosling also acquitted himself well. Still, I don't understand how this film got made.

Morning Glory--entirely forgettable romcom with Diane Keaton, Harrison Ford, and Rachel McAdams. If only Viña Delmar were still around...
Posted by Jenny at 12:44 No comments: