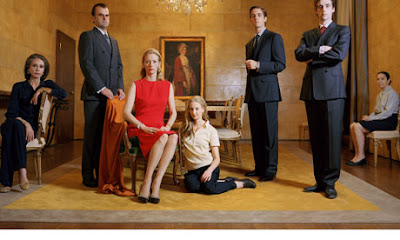 I really wanted to love this film. I bought tickets to the preview at the NFT with a discussion afterwards with Tilda Swinton and the director Luca Guadagnino. From what I had read, and from the film stills, it had all the promise of a Visconti epic coupled with the more Protestant sensibility of a Douglas Sirk melodrama. Precisely my fantasy of the perfect film (add Bunuel to this formula and you've got Almodovar?). The first half hour of the movie keeps the promise--all the exquisite details of the daily life of a wealthy Milanese industrialist's lavish lifestyle (Tilda Swinton plays his Russian wife) are lushly recreated. Apparently members of the Visconti family helped the set designers get everything just right and taught the actors which fork to hold and to ladle away--a certain Russian soup having a starring role in the film. But when for no discernible reason, Tilda falls for her son's friend, a budding chef, the film soon dissolves into an unappetizing gastro-drama, and the messy storytelling that follows is unconscionable. Non-enlightenment from post-film Q&A: Why is the wife Russian? In the original script, she was an American from the South but that presented too many logistical problems. What do all the flashbacks to her past add up to? Why do we never see any spark between her character and her young lover? Why does her daughter suddenly become a lesbian, cut off her hair, and move to London? Swinton explained that the choice to make the daughter gay was random, the hair-cutting a symbol of freedom--Tilda's lover will cut off her hair as foreplay--and only meant to show love's possibilities. All of these myriad script problems are set against a "throbbing"--Stephen Holden's term and he loved the film--musical score by John Adams, and framed within some fancy Hitchcockian camera angles, but the problems abide. The rest of the film was some kind of tasteless short-order job continuously using as ingredients pinches from the great classic Italian film directors: Visconti, Antonioni, Rossellini, Pasolini. And then came the most hilarious/excruciating sex scene in which a very graphic intermingling of bodies in several different sex acts is filmed in tandem with close ups of mating insects. This goes on for an inordinate amount of time just in case we don't immediately get the metaphor. But most nauseating of all is the banal moral message of the film: Carnal Sin, especially on the part of a woman, will inevitably lead to Punishment and Tragedy. Now, according to what was said in the conversation after the film, Tilda and Luca saw theirs as a film depicting the liberation of an oppressed housewife rather than a Catholic Church-inspired morality tale locating the source of all evil once again in female sexuality, but I'm afraid given the absurd event at the end of the film, there is really no other way to spin it. The daughter has become a lesbian, the mother has had extramarital sex, the family must suffer armageddon. I don't know why exactly but I expected way more of Tilda Swinton as a filmmaker. This project was almost ten years in the making suggesting an admirable perserverance. I'm not sure how it went so wrong, and from the reviews I am one of the few for whom it did so there's that. And I wonder at Swinton's urge to pull a Meryl Streep and learn Italian and Russian for the film. Therein, perhaps, lies the trouble. In the film, and in the discussion afterwards, the director and the producer/leading actor were inexplicably earnest, any underlying threads of irony, humor, playfulness strangely absent as they were from the film--something even the German Sirk knew how to make ample use of.
Posted by Jenny at 06:23 No comments: