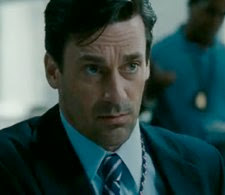 As I sat through Ben Affleck's ridiculously puerile, utterly derivative The Town, I marvelled at how kind reviewers can be. What I soaked up from pretty much all and sundry was that this film was a fine entertainment, with a 95% rating on Rotten Tomatoes. Implausible from the getgo, Ben Affleck managed to make bank robbery boring. As the four heisters geared up for yet another job, all I could think was oh no not again (though the series of masks worn by the theives was the best thing about the film, referencing the long thespian tradition and allowing for some true spectacle to occur.) The film begins by making much of the fact that this was going to be a portrait (yet another) of a particularly sorry Irish neighborhood in Boston (the helicopter shots of the city were appealing but had no real purpose other than announcing the film had a budget big enough to include them). But despite the evident strain to do so, "Charlestown" never becomes a character in the film in any way.
The script was beyond bad with so many laughably unbelievable lines that I felt embarrassed for the actors--well, mostly for Rebecca Hall whose part as a toney bank manager who falls in love with her abducter (Ben Affleck) was plain preposterous. I guess she did the best she could with the role but it was not a showcase for her talents by any means. Ben Affleck is nice to look at and the camera likes him but his acting has a tendency to be very flat and though he comes frustratingly close, he can't quite project *Movie Star,* placing him in the Keanu Reeves category.
I was thrilled when Don Draper (the wonderfully named Jon Hamm) appeared on screen, and I spent most of the film studying his performance since I love him so much on Mad Men. Again, like Rebecca Hall, he did what he could with the material but that wasn't much. I have high hopes for him but so far he isn't pulling a George Clooney and making the transition from tv to film with ease and aplomb. Making it as a movie star surely rests in part on being able to recognize a dud script, or at least having people who can do that for you.
Two actors who did manage to acquit themselves impressively were Jeremy Renner and Blake Lively. Renner (The Hurt Locker) played supreme badass (typecast in the making?) adoptive brother to Affleck and gave the film any life it had. Though Lively's part was so cliched as lowlife whorish girlfriend I felt nauseated for her, she succeeded in dominating the screen whenever, albeit briefly, she was on it. Cameos by old-timers Chris Cooper and Peter Posthelwaite were welcome, lending a sense of irony to otherwise excruciating dullness, but what were they doing in this movie? All this to confirm: never believe anything you read.
Posted by Jenny at 03:28 No comments: