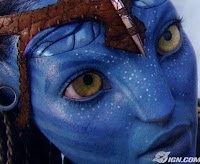 I wasn't going to see this film. The trailer looked terrible, I hated Titanic, I was disgusted by the disgusting amount of money that was proudly being swirled about its creation and promotion. I was told again and again by friends and reviewers: "terrible story but the special effects are great!" and, finally, my best film buddy said convincingly, "we're not going for the content, we're going for the form." So, okay, I didn't entirely hate it while I was watching it. I kept thinking as the glowing jelly-fish things floated across the screen: What if Cameron had the genius of Victor Fleming and had given us the technologically innovative film masterpiece for our times? A short-lived fantasy. Almost any film by Hayao Miyazaki, and certainly Princess Mononoke, to which this film is clearly indebted, is far superior to this piece of, well yes, trash. I won't go much into the 3D thing because it makes me sick (I suffer from every form of vertigo known to humankind and then some), but somehow even with the glasses over my own graduated-lenses (I'm nearly blind), the effect was for the most part pleasantly surprising, more like snorkeling than freefalling. The script was indeed terrible and there was not one good performance--though it was interesting to watch Giovanni Ribisi and Sigourney Weaver giving self-consciously B-performances in an effort to salvage the idiocy of their task. Actually, the film itself, which I saw now over a week ago, I have mostly forgotten--and probably was in the process of mostly forgetting while watching. As is my wont, I paid special attention to the female gestalt and Cameron aquits himself better on that front than a lot of contemporary directors, but ultimately only insofar as it serves his PC agenda i.e. PC sells because it actually promotes the opposite of its MESSAGE (more on this anon). On the other hand, Hurt Locker, made by Cameron's ex-wife Kathryn Bigelow, (a far better film but will lose all the awards to Cameron, a fact that is explained by the MESSAGE of Avatar--but more anon) chooses to leave women out of her film, a viable response by the director to the perceived role of women in our society. I'm kind of on the fence about art as corrective. I think finally it's better for women that Kathryn Bigelow is making a film at all than that James Cameron is making a film that has an apparantly kick-ass female protagonist--who in any case is, let's face it, second fiddle to the male lead (can't remember either the character or the actor's name) who saves the day. So here's what I mean by PC sells and how Cameron has exploited the concept: the profound problem with films like this one which is ostensibly about good vs. evil, where the "good" values of respect for nature and your fellow creature are threatened and then restored, where the "victims" triumph (and here I'm paraphrasing my hero Muriel Spark), is that what this kind of "art" offers is the worst, most pernicious kind of surrogate absolution. We rise from our viewing chastened, but all the more determined ourselves to be an oppressor rather than a victim. Films like these actively encourage "the cult of the victim" which then necessitates an obliging cult of twenty equivalent victimizers. Avatar, then, is in some ways a criminal act, a criminally bad script that ultimately promotes criminal behavior in the guise of empathy for the downtrodden. It's today's equivalent to the very popular medieval church practice of selling indulgences to forgive our sins and encouraging us to go out and sin again. Exquisite hypocrisy that ensures Cameron and the like will fry in the sixth ditch of the eighth circle of Dante's hell--the only one, by the way, that I believe in. In the end, my film buddy, who in general is far more forgiving a critic than I, found the film even more insufferable than I did, and my two boys who were initially indifferent to seeing the film, felt soundly entertained, but remained indifferent. So much for form without content.
For a far better, far more comprehensive, informed, and entertaining review of Avatar check out Steven Santos' review: http://thefinecut.blogspot.com/2010/01/i-dont-see-you-james-camerons-avatar.html
Posted by Jenny at 00:43 1 comment: