Virgin Stripped Bare By Her Bachelors 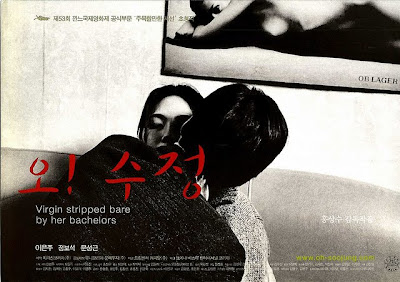 A friend of mine (@gsuh) familiar with Hong Sangsoo's work, told me that I had probably chosen to see his "slowest and least enjoyable" film as my first and so far only introduction to this much-lauded Korean filmmaker. But it was the only one playing at the BFI (British Film Institute), where they are having a festival of his films this month, on a night I happened to be free, so I jumped at the chance. At last year's London Film Festival, I had been awed by a film called "Mother" by another Korean filmmaker, Bong Joon-Ho, and was hoping to experience something similar. Plotwise, "Virgin Stripped Bare..." is a Korean arthouse version of "Sliding Doors" in which we are given first the male perspective on how Sujeong (played by the stunning Lee Eunju) comes to lose her virginity to Jaehoon, the wealthy owner of Growrich Art Gallery, and then Sujeong's own perspective on the matter. (The BFI program calls the film "a cubist romcom inspired by Marcel Duchamp"--a claim this film certainly doesn't live up to but also a claim I can't imagine any film wanting to live up to.) The film is beautifully shot in black and white and this is its saving grace, but, alas, the exquisite visuals didn't provide quite enough redemption for this viewer. By the time the second version of the story rolled around, I was so bored I didn't care to learn about the nuances of Sujeong's perspective--which in any case didn't seem to me to be very nuanced. Hong Sangsoo is known for his "wry and witty unravellings of tangled sexual relationships" but in this film the "wry and witty" were sadly absent and we were left with just an endless unravelling. My friend Grace says that her Korean national women friends all adore Sangsoo because he gets the female perspective so spot on. It may be a cultural thing but I didn't get that at all. I felt the film made fun of men and condescended to women and avoided any "truth" about the sexes by sticking to cliched vignettes of their predictably unpredictable interactions. (My friend Grace doesn't get Hong Sangsoo either but more graciously says, "I guess the whole relationship between the sexes in Korea is way more complicated than I can understand.")
Nevertheless, Lee Eunju is amazing to watch, her acting subtle and powerful. And though I have yet to understand all the hype about Hong Sangsoo and his apparantly fresh, funny, and surprising depiction of the male/female conundrum, there were enough inklings here of an alternative vision to make me want to do my best to see more of his films before the festival is over.
Posted by Jenny at 03:55 No comments: