Toy Story 3 and the Male Gaze 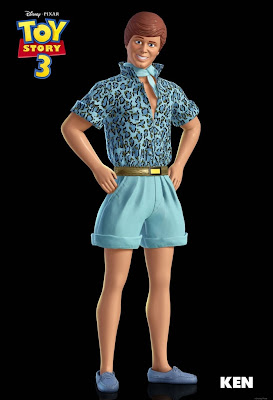 It may be because I saw this in New York City, where I almost always feel on some level ecstatic, but Toy Story 3 was for me nothing short of a revelation. I had heard from all and sundry that the film was exceptional. I had read how it had hoards of grown men leaving cinemas in floods of tears. I hadn't seen a film in a movie theater in three months. I was full of anticipation. But I could never have predicted what I was in for. On a superficial level, the film did everything right. It looked fabulous: the 3D was fun and elegant, never annoying or flashy. The plot twists were many and always surprising. Every character was so well drawn as to be uniquely him or herself, including the overtroped Barbie and Ken. As my six-year-old nephew summed it up: "That was funny, smart, and sad." But here's the thing: as I sat watching I couldn't help but think that this film was a very literal enactment of film theorist Laura Mulvey's famous-among-film-geeks phrase "the male gaze." Bear with me. The male gaze is for me as important an idea as Heisenberg's Uncertainty Principle, Einstein's Theory of Relativity, or Freud's Oedipus Complex (ok, I'm exaggerating, but just a little). In a nutshell, the "gaze" is a Lacanian term for a person's projection of identity onto exterior objects; the "Male Gaze" is Mulvey's idea that Lacan's statement "woman is a symptom of man" is reproduced in the cinema where the viewer is assumed to be male, femininity a male social construct, the female his object of desire, and therefore she constitutes his chronic sense of deprivation ("the male lack"), and simultaneously becomes the location of his positive identity.
Toy Story 3 is a primer for the "male gaze." The narrative presents that extraordinary engagement a boy has with his toys and how those toys all become aspects of himself. Superhero, cowboy, potato head, teddy bear, but also, and this is where the film becomes brave and brilliant, Mrs. Potato Head, the cowgirl, Barbie. The male gaze also projects its identity onto female objects, absorbing the feminine back into himself. The same goes for Ken: the quasi gay, metrosexual doll with a fashion fetish. The sequence in which Ken tries on all his different outfits for Barbie must be one of the funniest in film history. But the subtext is that all men have a part of themselves that wants to dress up and parade around. Toy Story 3 embraces all these "other" selves-a crazed baby doll, an embittered teddy bear, the cowgirl, Barbie, Ken, Mrs. Potato Head--and incorportates them into the uberself Andy. And each of the feminine representations here are in no way static symbols but rich in character. Why grown men are crying, in my view, is because they are mourning for all those lost selves that, as they grow up, become too taboo to include consciously as part of the self. His gaze is reduced to projecting only the "acceptable" male selves, and to projection onto only the limited female symbols of sex object or untouchable icon. I'd be crying too.
But I wasn't crying and neither was my neice. The screenwriters tried hard at the end to include us in the gaze by having Andy--on his way to college where his definition of self will no doubt become radically restricted--pass on his toys to a little girl. But no one was fooled. In fact, another nephew said that for him, this was the saddest part of the film: the toys would now be played with by a girl who wouldn't "do it right." I understood him completely. The female gaze, whatever that may be, will be very different from the male. To assume equality is a mistake and Andy's toys will know it.
Instead, it was entirely refreshing to me to see the male psyche portrayed on screen in such a varied and undefended manner. All of the toys, as projections of the male self, revealed aspects of masculinity that I reveled in. Despite theories that have emerged, since Lacan and Mulvey, arguing for the existence of a female gaze or a "Matrixial Gaze," it is my belief that we still have no concept of what the "female gaze" might look like. There are many women filmmakers, writers, artists, but the implied audience remains male--even if more women go to the movies, read books etc. Toy Story 3 takes a very big step towards owning and exploring the male gaze and all that signifies for both sexes, most intriguingly the sense of inclusion of female parts in the male self. It makes me think that the expression of the female gaze--the female projection of her identity onto exterior objects, including her construction of the male and masculinity--is perhaps not so far off and will be a further revelation to us all.
Posted by Jenny at 05:02 No comments: