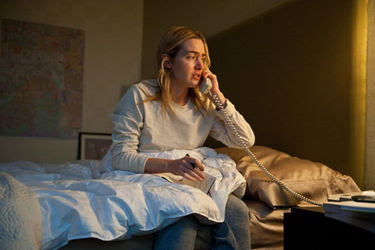 A few years back, I endured a particularly bad bout of flu, which I suspect might have been of the swine variety. Since then I have washed my hands obsessively, not quite OCD, but every time I come in from outside, every time I accept a delivery, every time I pick up the mail. If I'm out and about, I slather my hands with that sanitizing gel as often as I can remember to. After washing my hands in a public bathroom, I use a tissue to open the door to get out. I whole-heartedly agree with those epidemiologists who insist that a world-wide flu pandemic is not a matter of if, but when. Furthermore, I adore disaster films. My favorites from when I was a kid were King Kong, Godzilla (and all the sequels), The Poseidon Adventure, Towering Inferno, The Andromeda Strain--and I've seen The Day After Tomorrow three times (I'm a sucker for those scenes in the New York Public Libary). As anyone who has come to dinner at my house knows conspiracy theories are staples in my verbal diet. (Favorites: Chinatown, The Conversation, Three Days of the Condor, Enemy of the State, the Bourne films...) So there was no way I wasn't running to see Contagion--and with that director and cast--just as soon as I could.

Can you believe I almost fell asleep?

You've got to hand it to Steven Soderbergh that he could make a movie called Contagion seem as if it were shot in slow motion. It was as if the guy had no idea how to tell a story. Strands began that went no where. Characters introduced then forgotten. The whole film was a veritable school of red herrings. And all that "talent" gone to waste. Gwenyth Paltrow is almost immediately killed off, Marion Cotillard is introduced than disappears for most of the movie, Lawrence Fishburne and Elliot Gould reduced to talking head doctors, Jude Law had potential but his aussie conspiracy babble eventually went nowhere. We're left with Matt Damon to hold down the fort! I mean it felt like a cruel inside joke, as if Soderbergh were taking his directorial revenge on movie stars--the movie should have been titled "Revenge." The biggest waste of all was Kate Winslet. In the first half of the film, we kept watching for her--she was going to save the world from disaster as well as this disasterous film--and then Soderbergh KILLS HER OFF. A red nose, a stretcher in a make-shift hospital, body bag, gone. Soon after her demise I was seriously nodding off. Visually, the film had some extraordinary shots--almost worth seeing for this. Otherwise a dud.

(Sorry for all the spoilers but it's my belief that no one should read a film review unless you have already seen the film or have no intention of seeing it. If the review then changes your mind one way or the other, how delightful!) 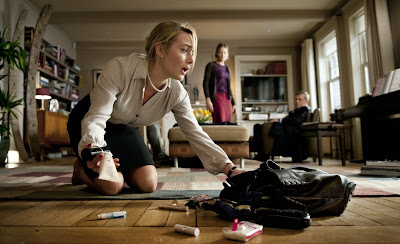 I didn't fall asleep in Carnage but I couldn't wait for it to be over. A film written and directed by the smug about the smug is just going to be flat no matter how many zippy speeches and drawing-room histrionics. The problem with this movie, besides the complete implausibility--and one dimensionality--of the script, was the casting. Jodie Foster is not a natural screecher, John C. Reilly kept struggling to give his hounded-husband-ready-to-explode routine more depth, Christoph Waltz was actually perfect because he understood the banality of his character and entertainingly stuck to type. But oh, Kate Winslet, what a waste! What was she doing in that room, with those people, with that husband, in that movie? She was too beautiful, too sophisticated, too intelligent for the part, her character so badly conceived as somewhere between trophy wife and kick-ass executive. Poor Winslet was totally at sea, doing the best she could as a dinghy in one scene and an ocean liner in another.
Posted by Jenny at 09:35 No comments: