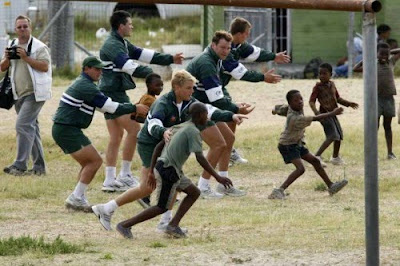 Clint Eastwood knows how to make a solid film and this one is solid and inspiring and was thoroughly enjoyed by my rugby-playing family as well as my non-rugby playing self. I have always believed in sport as metaphor, and if not always a unifier or entirely beneficial to one's mental and physical health, often so. Title IX of the Education Amendments of 1972 which effectively required equal funding for girls and boys sports in schools is probably the single piece of legislation since the 19th Amendment in 1920 to significantly change the lives of girls and women in the United States. All this to say that the premise of Invictus--Nelson Mandela as new President of South Africa does all he can to make sure the Springboks beat New Zealand's All Blacks in the 1995 World Cup in order to bring about something of a truce between South Africa's apartheid-riddled white and black citizens--is really great, and gave me a reason to mention Title IX, something I love to do any chance I get, and especially since women in this film are not exactly irrelevant but negligible. Was this a great film? No, but watchable and worthy. And by comparison it made District 9, also set in Johannesburg, look like a work of sheer genius (totally different genre but I have never been shy of criss-crossing genres--I don't even believe in genres actually). I now need to mention the excellent book this movie is based on: John Carlin's "Playing the Enemy: Nelson Mandela and the Game that Changed a Nation." Full disclosure: the author is represented by my neighbor and soulmate Anne Edelstein. (You get old enough and everything is connected.) So Clint pulled another decent enough effort out of his infinite bag of tricks (he makes Tim Geitner look positively lazy) and gives good message to boot. While watching the movie I, of course, barely focused on the rugby matches--which my boys tell me, and which I could never have told you since I don't even go to watch their matches, were well staged, but obviously staged. And I also couldn't tell you if Matt Damon's accent was any good, but it sounded good to me and he was all around convincing as a white South African professional rugby player--as was Morgan Freeman as Mandela. Instead, I focused on the film's title which is the title of a poem we learn Mandela recited to himself during his many years in prison in order to keep himself alive and which he then writes down for Matt Damon, the Springboks team captain, for inspiration before the fateful match. But I kept wanting to know who wrote the poem. Was it Stevenson, Tennyson, Browning? I never found out during the film since his name is never mentioned because he was no one famous. In fact, he was a Victorian poet called William Ernest Henley who went to his grave, like so many, believing he had failed in his artistic efforts. I assume the story of Mandela and the poem is true, but even if it isn't, I salute William Henley.

Out of the night that covers me,
Black as the Pit from pole to pole,
I thank whatever gods may be
For my unconquerable soul.

In the fell clutch of circumstance
I have not winced nor cried aloud.
Under the bludgeonings of chance
My head is bloody, but unbowed.

Beyond this place of wrath and tears
Looms but the Horror of the shade,
And yet the menace of the years
Finds, and shall find, me unafraid.

It matters not how strait the gate,
How charged with punishments the scroll.
I am the master of my fate:
I am the captain of my soul.

Up in the Air 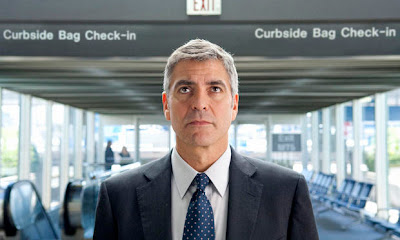 I really wish I had seen this on a plane. And not simply for the obvious thematic reasons. I am so much more forgiving of movies I see while on a plane. I'm so much more forgiving of everything--myself, my family, the food--while I'm on a plane. I think I might have even liked Juno and Thank You For Smoking a little better if I'd seen them on a plane. I was, in fact, avoiding seeing Up in the Air until I was on a plane, but then it was a Friday night and the kids were watching tv and the movie was playing as part of a Clooney double-feature with Good Night, and Good Luck (had already seen that one and loved it, and love George--he's my idea of a movie star, a combo of Clark Gable and Cary Grant, something his aunt Rosemary no doubt taught him) at our local independent cultural center which I like to support and, well, off I went. The film did begin magnificently. The opening credits were fantastic. The initial patter between George and Vera (a revelation!) was (almost) worthy of any '40s fast-talking-dame romcom. Anna Kendrick as the eager, fresh-faced professional without a clue, so spot on. This film was 100% perfectly cast and a perfect example of how casting is of dire importance. Without this very particular cast, the film should have gone straight to video. (Full disclosure: the fact that I have been to Sicily and shoe shopping with Mindy Marin, the casting director, has nothing to do with this opinion.) And then pretty soon it all began to head down hill, the amusing details of airmile aspirations and trenchant soliloquies by the laid-off keeping things aloft, but the impending nosedive was palpable. By the sister's wedding, the tour around the high school, the cold-feet pep talk, the plane, the movie, had crashed. (On second thought, maybe it's better I didn't see this on a plane.) The script was smouldering in Hallmark schlock, the edgy social commentary had morphed into a propaganda tool for the status quo, blandly repeating the Walmart-coated sentiments of love and commitment and pursuing your dreams--while the Corporatation makes off with the suckers', ahem, employees, hard earned loot. It made me want to puke. Why is it that someone as obviously talented as Jason Reitman cynically decides to make a career out of choosing charged "social issues"--smoking, teen pregnancy, unemployment--and pretends to have something to say about them but really is just using them to sell his films? For me, it's like throwing a kid with a terminal illness into a film simply in order to make your audience cry. Devoid of integrity, or worse. For the record, the book was better than the movie, and I spotted the author Walter Kirn, another acquaintance (such friends in high places!), in two scenes--looking a little bemused by the whole thing.
Posted by Jenny at 02:14 No comments: